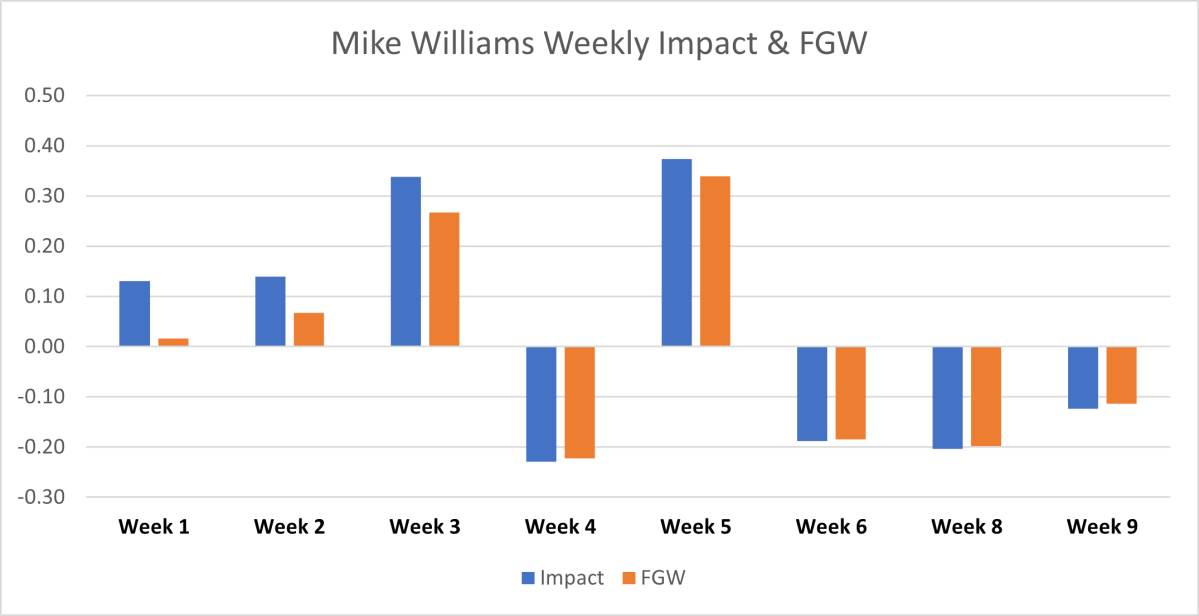 What is FGW? Check it out here: https://byroncobalt.com/2021/09/19/introducing-the-fantasy-game-wins-fgw-fantasy-football-player-scoring-system/

Attempting the Saturday morning as I was “overcome by events” in trying to get it out on time. We’ll see if this is a better slot!

One of the most common comments I received earlier in the season was “hey, why isn’t Mike Williams like literally the top player on your metric?”

The easy answer here is, for Mike Williams’ solid weeks 1 and 2, he did most of the damage on people’s benches. This was true both before and after my incorporation of expert rankings to try and distill “good” fantasy manager % started rates. But how much did it impact Williams exactly?

Hypothetically, if Mike Williams were started near 100% of the time (obviously besides his Week 7 bye), his FGW would be around 0.24 – around the 44th best score, worth a 4th round pick.

His actual FGW? -0.03. So on average, he’s decreased your chances of winning versus an average starter, after considering the fact that you probably didn’t start him weeks 1 and 2.

It was needles-out last week after my first hot take of 2021, as new Redditors came out of the woodwork to try and poke holes in my balloon of hubris. In the spirit of continuous improvement, here’s a list of actual upgrades I plan to make to the metric:

Who Won The Week?

The Best and Worst Picks (dFGW)

More than halfway through year 1 of FGW! Thanks to everyone for the eyeballs. Please accept my offering of a spreadsheet as thanks.